It began with an email:

Come join us to help with the plan for bringing youth football back to Radnor Township.  It will be great for our sons and great for our community....

In an amazing display of community spirit for which we will forever feel pride the Radnor Raiders Youth Association or the Radnor Young Raiders was established in 2012.  A group of “football parents” got together to discuss possibilities of establishing a youth football team in Radnor.  Within a few short months, by laws were written, the non-profit Association was established, and the Association proudly joined the Bux-Mont League of POP Warner Football.  Our group expected to field two teams in the 105 and 120 pound categories for its first year.

To our surprise over 125 young men signed up for football.  We fielded 4 tackle teams along with 2 flag teams that first year.  Perhaps the most astounding and heart-warming reaction was from the community.  Along with countless private donors, The Radnor High School Football Boosters provided start-up funds, the Radnor High School Athletic Director, Head Coach, School Board and Radnor Township supported the effort donating time, field space, and open arms….and so, the amazing Radnor Young Raider Football and Cheer Program was born.

Everyone knew Radnor had something special.  In the very first year, the flagship, 105 pound team, surprised its Bux-Mont league rivals by making it to the highly competitive Championship.

The generosity and true human spirit of Radnor gave birth to what is today a source of pride, leadership and athletic excellence for so many young men and women of the community.  For this we are truly thankful to the founders.

Inaugural Board of Directors 2012 - Officers:

And Others Who Supported and Helped:

And of course the 2012 Radnor Young Raiders Players- 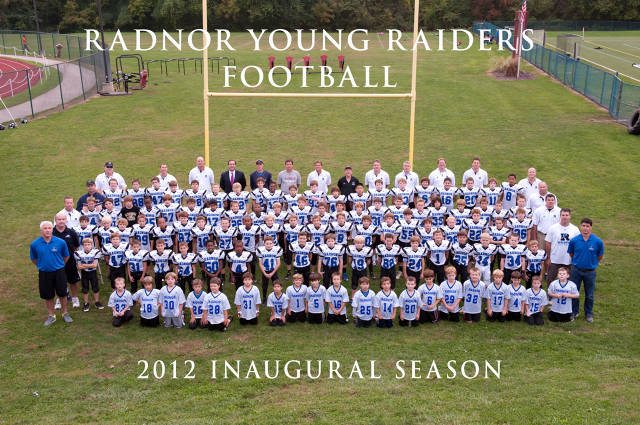