First I'd personally like to congratulate EVERYONE who played for Crabby Joe's this season! Thank you. Also thanks to our sponsor and host every Friday night Crabby Joe's Bar & Grill (Chatham), to its owner Dan and all the wait staff! It made for a very FUN summer. I loved playing the games every Friday night, but I also loved the players and the parties that follow every game!! I hope everyone enjoyed it as much as I did. OK, onto the tournament! The results were not in our favor as we ended up losing every game BUT we played VERY GOOD BASEBALL. Everyone was hitting & fielding a lot better than we were 3 months ago. We should be proud because we played fair & were sportsmanlike ALL year, unlike some of the other teams. We always took the high road. Well done. We lost the first game 7-4. We came within 2 hits of winning this game in the bottom of the 7th. Sparks' played a good game. We caught a few bad breaks with the early morning sun, that cost us easy runs, but oh well. For the most part we hit well and just came up short. Offensively Jimmy had 2 doubles and 2 singles. Matt was 3/3 with 3 singles. James had a double and a single. In the second game we lost 6-4. Fubar played extra HARD and wanted to win, as was shown with Robyn getting taken down twice with hard slides into 2nd base. Brett made a pretty sweet unassisted double play while pitching. First tagging a runner going to 2nd base, then touching 1st base. At the plate Joey had 2 singles. Brie had a single, a walk and a run scored. In the third game we lost 11-6. We only played 5 innings and Sun Parlor cut the game 5 minutes short. I was pretty bitter. They also hit out-of-order during the 4th inning which lead to better players hitting more often. Very sneeky. In the game Mel made a great catch at shortstop on a fly ball. Jimmy also caught a deep fly ball that seemed to be over his head. At the plate Beth had 2 singles, 2 RBI and a run scored. Robyn had a single, an RBI and a run scored. Mel also had a single. In our last game of the year we lost 5-3. WVG Trucking came out to have some fun, and we did too. They scored 4 runs in the last inning to pull off the upset, as we had beaten them twice during the regular season. Jimmy made a great throw from the outfield to James at 3rd base to catch an advancing runner. Offensively Brett had 2 singles and 2 RBI. Jamie had a single and a run scored. Just like that our season was over. At the end of the day we were mostly all sunburnt, drunk and tried. It was tough playing 4 games in a day. It's 3 days later and my arm & legs still hurt from pitching all 23 innings!! But it was worth it. This will be my last post of the season. I had fun with this website and I hope you all enjoyed reading it on a weekly basis. Hope to see everyone again next year! - Brett Goudreau 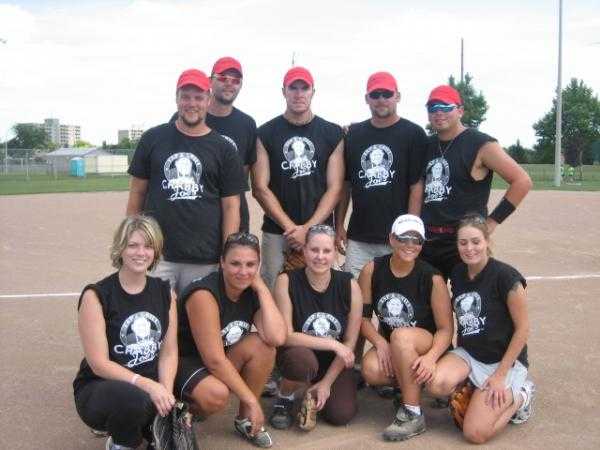