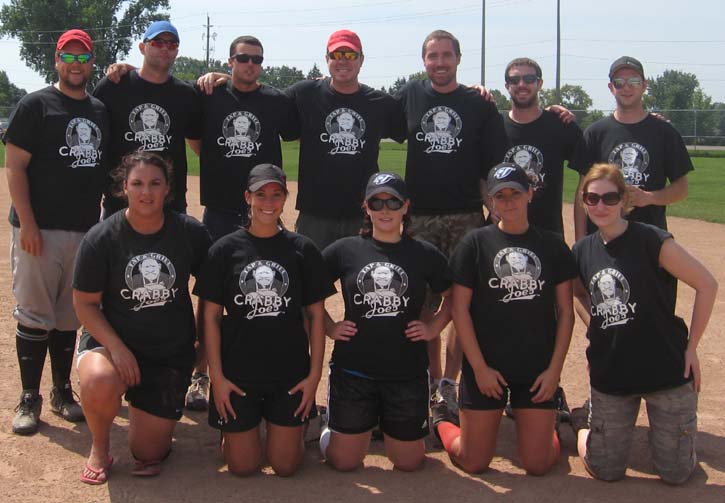 The tournament again pitted us against the best. "A" pool included 3 of our 5 season losses. It was gonna be a grind.

The story of the tournament for us was "The Best Defense in the Entire League", strategic pitching, but ultimately a lack of offense and victims of the "what if" scenario.

We played very well. Got our first tournament day victory in 2 years. Revenged a bitter loss. And drank more booze - bar none - than the entire league (possibly combined!!) If it was truly a "beer league" than we won months ago.

Game One
Final Score: Crabby Joe's 1 Lubies Car Wash 1.In the first game on Friday night it came down to our last at-bat in the 7th inning. Jimmy leadoff double set us up for success. Then in a twist-of-fate, a diving catch in the outfield on a Caress liner resulted in a doubleplay. Scott followed with a double but the team couldn't drive him in. Chris had a double, a single and a run scored. Jimmy had a double, a single and 1 RBI. Scott had a double and a single. Lauren had 2 singles. Lianna, Caress & Robyn had a single each. Brett pitched all 7 innings allowing 1 run on 10 hits.

Game Two
Final Score: Second 2 None 1 Crabby Joe's 0.In our first game Saturday morning we had to revenge our regular season 23-1 loss. We played awesome defense and gave up only 1 run in the 5th inning but we were unable to answer. Lianna had 2 singles. Chris, Jimmy, Matt & Brett had a single each. Brett pitched all 7 innings allowing 1 run on 7 hits, while walking 1 and striking out 2.

Game Three
Final Score: Crabby Joe's 4 Simply Bright 1.In a critical rematch from the Friday before we played "small ball" - got on, moved runners over, sacrificed and manufactured our 4 runs and again played stellar defense. Chris had 3 singles. Jimmy had a double, 2 single and 2 runs scored. Brett had a single, a walk and 1 RBI. Scott had a double and 2 RBI. Big had a double. Matt had a single and 1 RBI. Kevin, Lianna, Caress & Robyn had a single each. Brett pitched all 7 innings allowing 1 run on 8 hits, while striking out 3.

Game Four
Final Score: Blairs' Boot Camp 5 Crabby Joe's 0.With our luck/skills thus far we "got a shot" - Win and we're in. Seemed simple except we were against the undefeated Jerseys/Bigshot Rivercats/Blairs' Boot Camp team that has always had our number. Lianna had a double and a single. Chris, Jimmy, Matt, Big & Robyn had a single each. Brett pitched all 7 innings allowing 5 runs on 14 hits, while walking 2. 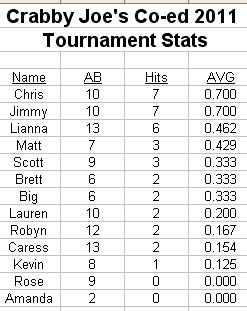