Five-O's On Top of LOL World

The Oconomowoc Five-O's are the LOL grand champions for 2007 after defeating Cedarburg in a tight contest on Saturday September 15 by a score of 3-2.

Jeff Rhoads had a hand in every Five-O rally, scoring all three runs. He hit a solo home run in the first inning. He singled in the fourth inning and scored on Josh Bouche's infield grounder. Rhoads tripled in the sixth and scored on Derek Nelson's single.

The championship is the 10th for Oconomowoc. They last won it all in 1999. For Cedarburg, it marked the second straight year of being the runner-up.

A summary of game scores in the tournament follows:

Click on the LOL grand championship playoffs link in the headline box above to read an account of the championship games in the tournament. Following are the game scores.

Congratulations to the Butler Dunns, the Land O' Lakes grand champions for 2006.

Seven-Up scored all the runs they would need in the first inning as leadoff hitter Taylor Koth reached on an error. Andy Hetebrueg singled ahead of the first of two Mike Mueller home runs on the day. The other runs in the inning scored on an Adam Rohlinger double and Jed Justman infield grounder that was muffed. West Bend added another run in the second inning when Erik Kraemer’s grounder was bobbled.

Bynum and Mike Mueller each connected on solo home runs in the seventh inning to conclude West Bend’s scoring.

Kenosha’s only scoring chance came in the seventh inning when they loaded the bases with one out. West Bend worked out of the jam thanks to a double play.

On the mound, Hetebrueg struck out 10 batters.

BROOKFIELD – Scoring two runs in the bottom of the eighth inning, the Brookfield Bulldogs came from behind to defeat the Cedarburg Mercs 8-7 on Sunday to win the 2011 Land O’ Lakes grand championship.

The Bulldogs, champions of the Western Division, led for the majority of the game until the Northern Division champion Mercs scored three times in the top of the eighth inning to take their first lead of the game at 6-5. Brookfield answered with two runs in their half. Jason Rutz reached on a fielders choice and scored the tying run on Kris Franzen’s triple. Scott Booth singled Franzen home with the game-winner.

Brookfield’s starting pitcher, Josh Eidt, was again a tough puzzle to solve for the Mercs. He did not allow a base runner until Gilbertson’s one-out single in the fourth. Eidt struck out seven and walked three in seven innings of work.

The Bulldogs scored first in the second inning to take a 2-0 lead. Jeff Lueck led off with a walk, with Mike Jacobs reaching on catcher’s interference. KC Pinsoneault sacrifed both runners up a base and reached safely on a throwing error. Josh Lemke’s sacrifice fly scored Lueck, with Jacobs scoring on Andy Monigal’s single.

Brookfield’s lead grew to 3-0 in the third inning when Booth singled and scored on Jacobs’ single. The score remained 3-0 until the top of the sixth when Cedarburg scored three times to tie the score, with all the damage coming after two outs. Reichhart led off with a double followed by a walk to Joe Daniels. Steve Hopfensperger sacrificed the runners up a base. Another walk to Nolan Gilbertson loaded the bases before John Vandenberg’s RBI single.

Josh Lemke reestablished the lead for the Bulldogs in the bottom of the sixth inning with an RBI single. Jacobs added an RBI single in the seventn to give Brookfield a 5-3 lead.

Brookfield outhit Cedarburg 10-8 in the game. Collecting two hits each were Franzen, Monigal, Booth and Jacobs. Gilbertson and Regnitz had two hits each for Cedarburg.

At a meeting on December 16, the LOL Board of Directors rejected by a 6-2 vote a proposal to advance the start of the grand championship playoffs (GCP) by one week. The proposal was made in an effort to promote fairness between teams that rely largely on college-age talent and those that do not. While directors agreed on the desire to have teams in the GCP playing at close to full strength, they disagreed on the effects of the change on the regular season. Divisions where the majority of teams play on unlighted fields would have had to scheduled one or two additional two-game weekends.

Another proposal to add a second team from each division to the GCP was pulled from consideration.

For the championship game, since the teams will have already played once in the playoffs, the home team in the first game is the visiting team in the second.

The 87th season of LOL baseball has concluded with the crowning of Northern Division champion Cedarburg as the 2008 LOL LOL grand champions.

Cedarburg defeated Waterford on September 7 by a score of 7-1 to erase several years of heartache in reaching the finals only to fall short. Waterford staved off elimination by defeating Cedarburg on September 6 11-10 behind a pair of home runs by Bart Nowicki, who also drove in seven of the 11 runs.

The Cedarburg Mercs used clutch hitting to win the 2008 Land O’ Lakes grand championship, their first since 1997. Cedarburg had finished as the runnerups each of the past two seasons.

The Mercs broke through for the first run of the game in the third inning. Three more runs in the sixth inning gave the Mercs a 4-0 advantage. A walk to Brian Bert started things. After a single by Nolan Gilbertson, John Regnitz blooped a double inside the right field line to score two runners.

Waterford’s Tony Chapman led off the bottom of the sixth with a double and scored on Brad Nowicki’s double, Waterford’s only hit with runners in scoring position.

Tom Gaertig led off the Cedarburg seventh inning with a walk. After singles by Wade and Bert loaded the bases, Ross Zahour’s infield grounder scored Gaertig, with a throwing error allowing Wade to score. Reichhart’s solo home run in the eighth capped the Cedarburg scoring.

Reichhart had three of the 13 Cedarburg hits in the game, with Regnitz and Bert adding two each. Brad Nowicki collected three of Waterford’s nine hits while Bart Nowicki had two.

Waterford player-manager Bart Nowicki single-handedly led his team to victory in an elimination game Saturday. He collected four hits, including a pair of home runs, and drove in seven of the 11 Rivermen runs.

The winning run scored in the ninth on Chris Harmeling’s double. That came after a three-run rally and a dropped infield fly ball allowed the Rivemen to tie the game in the eighth inning.

Cedarburg jumped out to a 6-0 lead after two innings with Nolan Gilbertson accounting for four of the runs on a two-run double in the first and a two-run home run in the second.

Bart Nowicki’s three-run home run got the Rivermen on the board in the third inning. He added a solo blast in the fifth after teammate Adam Brechtl cracked a two-run home run of his own. Nowicki’s second home run tied the score at six.

Cedarburg untied the game in their half of the fifth on a suicide squeeze bunt by Wade and a two-run single by Bert. 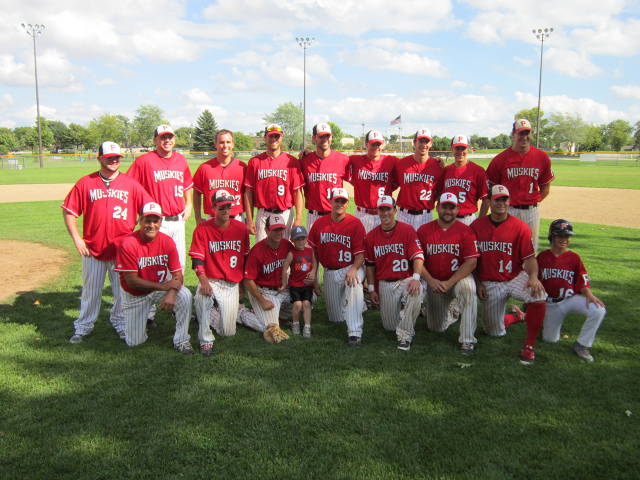