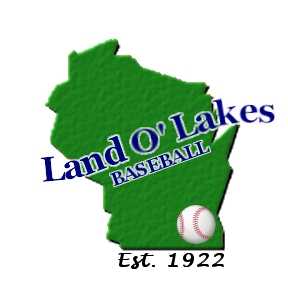 As many of you know, next season (2021) will be the 100th for Land O’ Lakes baseball. To commemorate this we have a number of plans in the fire one of which is a historical compilation of the LO’L that would be available online and in hard copy. In order to help us with this we would like to ask if anyone has a brief history of their franchise or any old pictures could you send me a copy we could use? If you have any Memorabilia we will be setting up some displays also so let me know what you have.

Submissions can be emailed or mailed to LOL President Mike Hausen. His contact information is below.

Thanks in advance for any help you can provide.

In Memory Of Our League's Founder 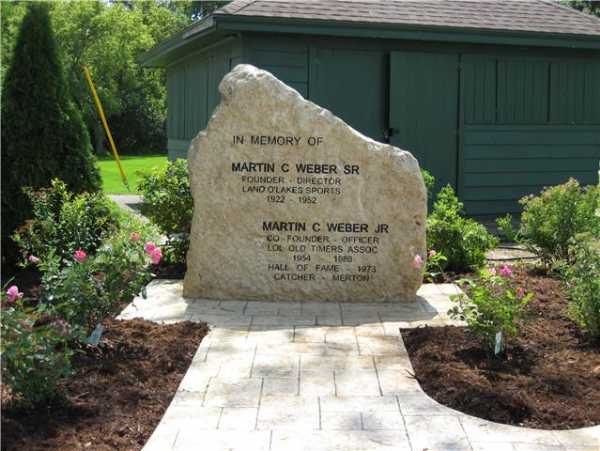 The above memorial located at Firemen's Park in Merton is in memory of the founders of the Land O' Lakes Baseball League and Land O' Lakes Old Timers Association, Martin C Weber Sr. and his son, Martin Jr. (photo courtesy of Ellen Sizer, granddaughter of Martin Weber Sr.)

It was announced on September 20 that the LOL's current Western and Southwestern Divisions have agreed to merge and operate under one organizational structure. The most notable changes will be that the current membership of the divisions will be split into four newly named divisions and a scheduling format that will see teams play two games against other teams in their division and a rotating format where they will play one game against two of the other three divisions. The new format means teams will play a minimum of 15 of the 19 potential opponents either in regular season play and the first round of post-season playoffs.

With 2021 being the 100th season of Land O' Lakes baseball, many events will take place that involve all league teams. More details of these events will be shared at a later time.

The tentative divisional lineup is as follows:

More information can be found on the LOL's Facebook page.

The Land O' Lakes Old Timers Association recently announced its Hall of Fame Class of 2020. The group of six players and contributors will be formally inducted in 2021 due to the current health situation. Below are members of the Class if 2020.

This year's League Meritorious Award winner is Kevin Stapleton of North Lake. There is no Ray Klink President'a Award this year.

The Land O' Lakes Baseball League has been around since 1922 to provide players in local communities in southeastern Wisconsin the chance to play baseball. Eligibility to play on a particular team is based on a player's residence.

Teams are always looking for new players. There are no age limits, however, players under age 18 require signed parental permission prior to playing in their first game. Also, high school age players are not eligible for LOL play for a particular year until their high school's baseball season is over.

If you are interested in playing LOL baseball, use the email link in the left-hand column to email the webmaster the following information: your name, address, phone number, positions played, etc. The webmaster will put you in contact with teams in your area.

At the bottom of the home page, a calendar listing of events related to Land O' Lakes baseball will appear. To have your event appear on the calendar, please email the details to the webmaster through the link in the left-hand column.

Please include in the details the name of the event, date, time and location. Include a few details about the event and a contact name and phone number in the event a site visitor has any questions. Thank you.