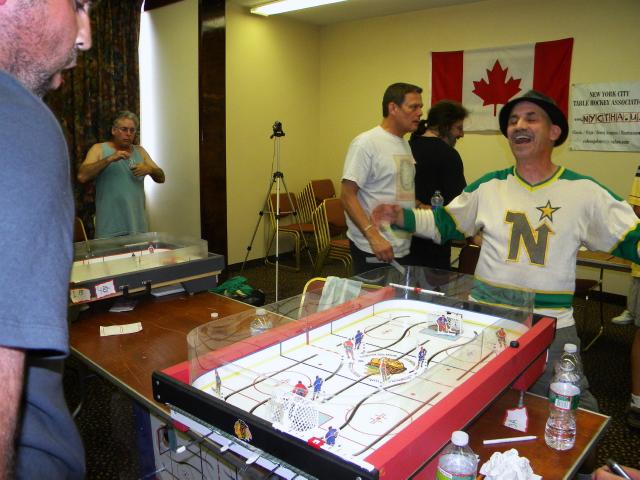 Back in August 2005 I was invited to a "bring your own game" event in Marysville PA.  It was an eye-opening event (the guys weren't much to look at but the variety of classic table hockey games was).

One game in particular caught my eye.  It was a coleco 5385, circa 1982.  The defense slots were shaped like an S, the game was only 19-1/2 inches wide, and taking the puck out from behind the net was an adventure.  But the game was fast, faster than any other game I had played on to that date.  The game I grew up on was the original benej game, then stiga . . . but this was something else.  Spring driven, flat players, and tight "checking," the 5385 was a game that drew the emotions out of all who played on her.  On my 3 hour drive home, I made plans to get my hands on one as soon as possible.  Luckily, my table hockey Mentor, Adam Z., told me to get in touch with table hockey impressario Len Mecca, who guided me to the man most responsible for bringing the coleco 5385 back to life, Martin Labelle.  Martin, you see, was making state of the art coleco games for a tournament circuit up in Quebec.  He sold me a game two days later and in a week I was on my back deck going toe to toe with my brother.  This game simply scorched! 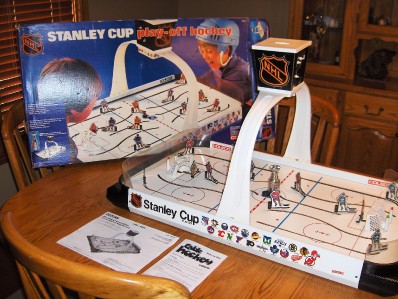 You see, there aren't many places to hide on the s-slot pattern.  With a level game and glass and new rods and a weighted down irwin puck, you can be fast and precise and allow the game to sing.  Each game has its own song, and before long I bought a second game from Martin, had a tournament, and started up a league in September 2006. Along with Greg Scoma and Anthony Sciacca, we had a terrific "Classic" league using these games, and games we bought from Carlo and Gino Bossio who picked up the torch from Martin Labelle and now build the custom coleco games. ( www.canadahockeytable.com )

After a break and a successful Vintage League, we have decided to get back to the custom coleco Classic League and invite you to come out and see for yourself why this particular game, revered in Quebec, is such a special one; how it can transform even the most meek and quiet person into a raging puckster in less than five minutes.  Its exciting, its back, and you know what?  Its about time!  Come out and see for yourself how this game has "soul."  We are playing Saturday November 3rd.  Email me if you would like to play. 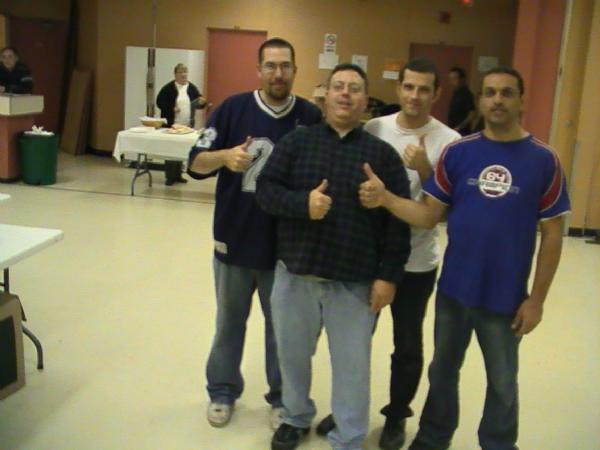 Hangin' with the Big Boys!  From Martin Labelle's 2008 Sherbrooke Tournament, which he won . . .

To get your hands on a custom coleco 5380, visit www.canadahockeytable.com